Tour meets at noon at the  corner of Maple and Bridge Streets. 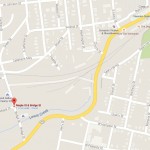 Our second walking tour of the 2016 Staunton’s Neighborhood Brown Bag Series looks at the arrangement of streets and buildings of the Tannehill / Wheat neighborhood.  Located to the west of Bridge Street, between the railroad tracks to the north and Maple Street to the south, Tannehill / Wheat includes several variations on both residential and commercial architectural styles.  Two major streams, local topography, and the railroad tracks placed along an east/west axis have heavily influenced the arrangement and character of the neighborhood.  We look forward to continuing our explorations of Staunton’s neighborhoods in Tannehill / Wheat; members of the neighborhood will join us to share their stories of the culture, life, and history of the area.