In Remembrance of Doris L. Smith

Doris Smith, an early and ongoing supporter of Historic Staunton Foundation, passed away on August 21, 2015. Doris and her husband, Jake Smith, quietly provided the means for many community organizations committed to improving quality of life in both the city and county to get off to a secure start, and they encouraged others to join them in their support.

The Smiths saw the value of the historic preservation work performed by HSF and helped acquire and rehabilitate our first office building at 120 S. Augusta. Later they were the drivers behind the restoration of the R. R. Smith Center as a center for history and art. They corresponded with HSF leaders for many years regarding the need for a shared facility, and supported the establishment of a home for the T.J. Collins and Sons Architectural Collection. The R.R. Smith Center for History and Art was named in honor of Doris’s husband, though he never asked for or expected that honor.

Doris was on the board of HSF from 1978-1980. She generously opened the Smith’s gracious home – Smithleigh – for a reception to kick off our first fundraising Preservation Ball, and provided a bus to shuttle guests to and from SMA where the Ball was held.

The Smiths commissioned the mural of historic Staunton buildings by John Ruseau and funded the purchase of the complete Ruseau collection that now hangs in the hall of the Smith Center opposite our offices. Additionally, Doris helped HSF create the beautiful notecards inspired by the mural that are offered in retail locations and used for HSF correspondence.

Our community will forever be indebted to Doris and Jake Smith. We will miss their leadership, vision and generosity. 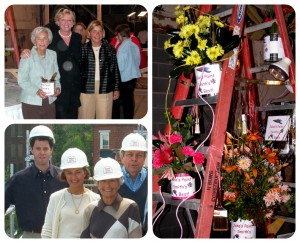